Among a population referred for fetal echocardiography (FE), abnormalities are noted in 7.7% and the most common abnormal neonatal diagnosis is HLHS (16.6%). [1] 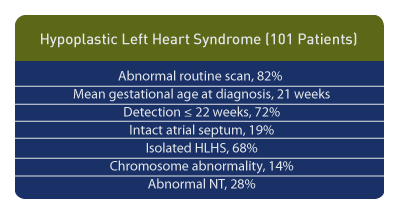 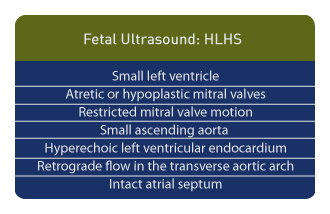 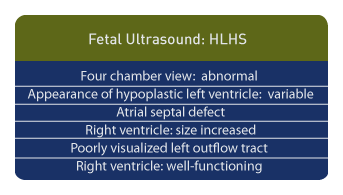 A four chamber view is usually abnormal in HLHS, but the ultrasound appearance of the hypoplastic ventricle is variable from being smaller than normal to not being identified at all. [4] Other potential findings include atrial septal defect, increased size of the contralateral ventricle, non-visualization or poorly visualized outflow tract, and intact ventricular septum. [5] The right ventricle will look large compared to the left ventricle.

Since flow from the left atrium is left to right in HLHS, the inter-atrial septum will be bowed from left to right and the ductus arteriosus will be larger than normal.

Poor or minimal flow across the mitral and aortic valves can be demonstrated by color Doppler, while direction of flow can be assessed by pulsed Doppler.  It is important to distinguish between stenosis and atresia for each of these valves, since this distinction affects post delivery surgical decisions.

Since restriction of the atrial septum in HLHS correlates with poor outcome, attempts at assessment are important.  The size of the atrial septal defect can be correlated with the degree of restriction.  Pulmonary venous pulsed Doppler values under these conditions should be considered and demonstrate systolic flow velocity patterns.  S/D ratio values and peak reversal wave patterns correlate with the degree of restriction. [6] An intact atrial septum is defined by a triphasic flow pattern in the pulmonary vein with  first an antegrade component during ventricular systole, followed by little or no flow during ventricular diastole, and a peak of reversal of flow during atrial contraction. [7]